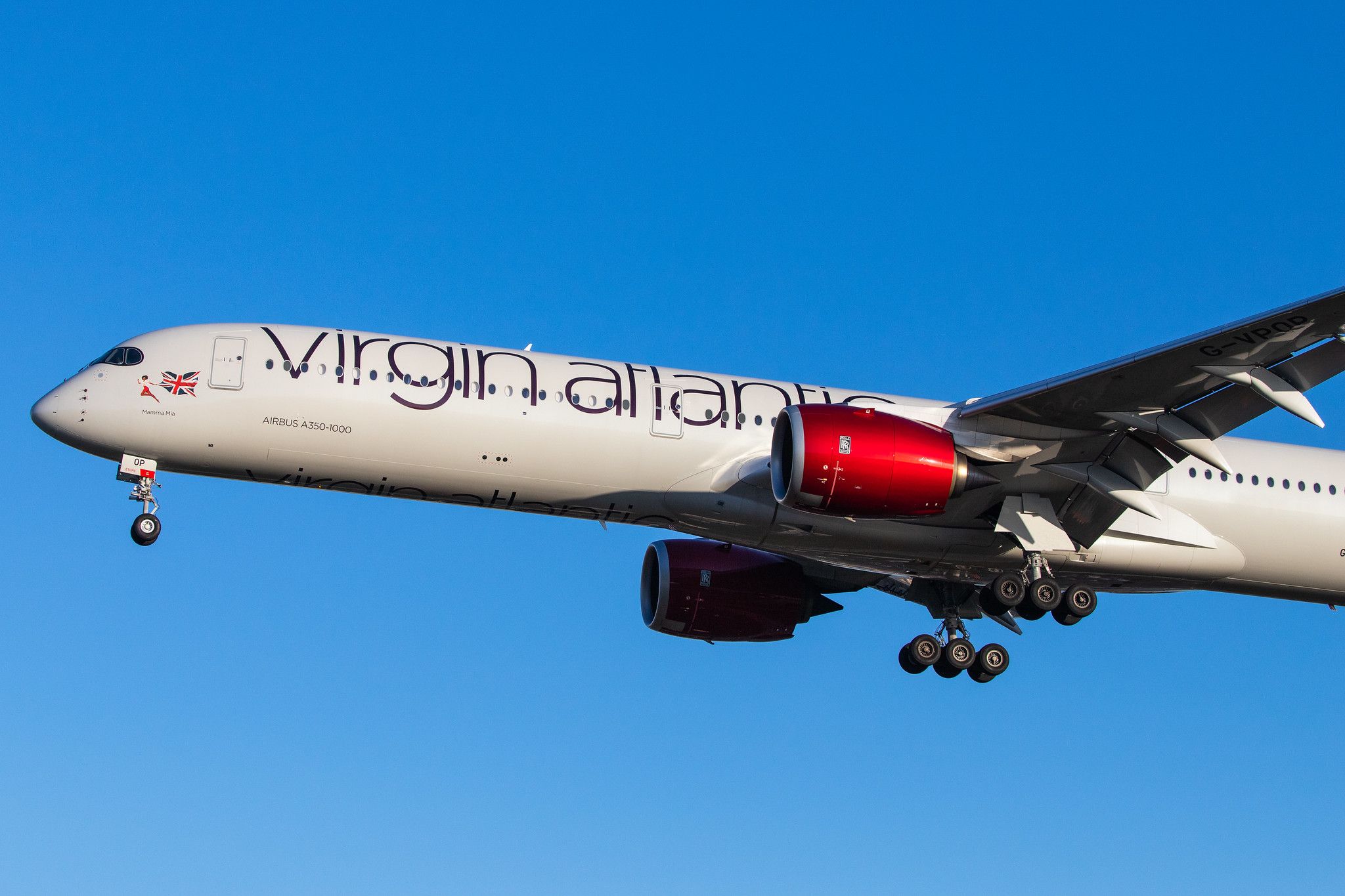 Virgin Atlantic’s fleet in 2022: only three types of planes

Especially compared to fellow British carrier British Airways, Virgin Atlantic’s fleet is a much simpler and smaller collection of planes. Indeed, British Airways’ fleet is almost eight times larger than the subject of today’s article. After shrinking significantly due to the pandemic, let’s dive into the Virgin Atlantic fleet.

The Virgin Atlantic fleet at a glance

According to Planespotters.net, here are the aircraft types operated for Virgin Atlantic at the time of this article’s publication, including their quantities and average age:

A few obvious things stand out from this list of planes. The first is its surprising brevity with only three types. You will also notice that all of these planes are jumbo jets, as well as the fact that they are all jets.

Indeed, the handful of passenger narrow bodies operated by Virgin Atlantic are long gone. The airline bade farewell to its only Airbus A321-200 in October 2001, as it retired its last A320-200s (on wet lease from Aer Lingus) in September 2015. You may have noticed or not that we had specified the absence of passenger narrow bodies. Indeed, the airline is currently leasing an A321 freighter from Titan Airways, with the arrangement due to end in October. The first foray into the operation of dedicated freighters, the agreement with Titan provides for a single A321 freighter operating between London and Brussels.

Virgin Atlantic operates two of the most efficient wide-body jets available on the market: the Airbus A350 and the Boeing 787. 787-9s began arriving in October 2014 and the airline took delivery of its 17th Dreamliner in April 2018. These jets have three classes and are configured with 31 seats in business class, 35 in premium economy class and 198 in economy class.

The Airbus A350-1000s first arrived at Virgin Atlantic in August 2019. Announced in 2016, the order was for 12 of the type, meaning the carrier is expecting at least three more. However, we do know that the airline is expecting a total of 14 A350s. This is due to an agreement for two additional A350-1000s leased from Air Lease Corporation (ALC). The carrier will take delivery of these particular aircraft in 2023 and 2024, adding to its existing order with Airbus.

A notable aspect of Virgin Atlantic’s Airbus A350s is what the airline calls “The Booth.” This special feature is a cozy nook available on the airline’s flagship where customers can socialize and dine with one another. Passengers can also pay for a special in-flight wine tasting experience with drinks provided by The Uncommon, a British wine and spritzer producer.

The cabin was first installed on the A350 registered G-VEVE. The plane is named Fearless Lady in honor of Richard Branson’s mother, Eve Branson. G-VLIB was the second A350 to have this feature installed. However, Virgin Atlantic wants a total of three A350-1000s to have this special leisure configuration.

On this, Corneel Koster, Chief Customer and Operations Officer at Virgin Atlantic commented,

“We are famous for our onboard social spaces and the introduction of The Booth elevates the customer proposition for our leisure travelers to new heights. We love creating brilliantly different experiences, so we’re constantly evolving our ideas to deliver something different and exciting in the air and on the ground.” 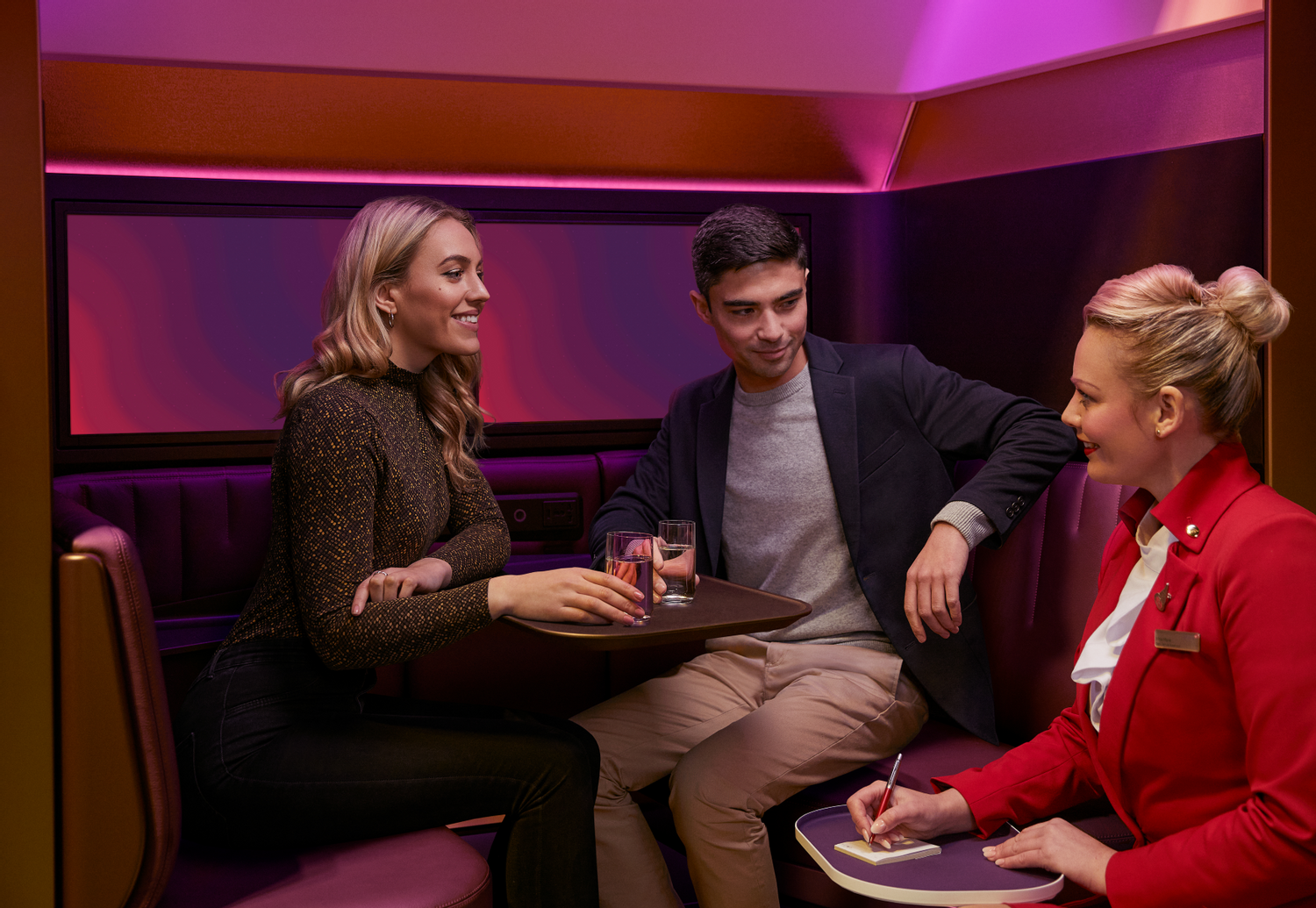 It was in June 2019 at the Paris Air Show that the carrier announced that it would modernize its fleet with the acquisition of 14 A330-900s. This order also included six other options. In the initial announcement, these were to replace its A330ceos from 2021. The plan was for the incoming jets to be a one-for-one replacement of its 14 Airbus A330ceos (current engine option). However, even before the new -900s appeared, the carrier’s four A330-200s were phased out. This took place in 2020, with two of the four aircraft now marked as “partially scrapped”.

As for the arrival of the first of 14 A330neos, it is expected to take place next month – slightly later than the original 2021 entry-into-service plan. Of these 14 jets, eight will be purchased directly from the carrier while six will be leased to Air Lease Corporation (ALC).

In early August, we reported that seats on these new jets were now bookable. The first service to offer the all-new aircraft will be flights between London Heathrow and Boston Logan. The maiden flight is scheduled for October 12. The jets will have a three-class configuration with 32 seats in business class, 46 in premium economy class and 184 in standard economy class.

The new jets will also include a social area. Similar to the A350 “stand” but better known as “The Loft”, this will be space for eight people. The airline says it’s ok “allow customers to sit and chat or enjoy refreshments from the new self-service fridge and beverage dispenser. Customers can also connect Bluetooth headphones to the two 27-inch panoramic touchscreens or use the facilities of wireless charging for their devices.”

The airline is replacing its A330-300s with more efficient -900s. Photo: Virgin Atlantic

The most recent news about this new variant of the A330 was on August 12. It was on this day that the carrier’s very first A330-900 took off for a first test flight from the Airbus facilities in Toulouse. When delivered, the aircraft will adopt the British registration number G-VEWR. The particular cell has the Manufacturer Serial Number (MSN) 2018.

The 2020 pandemic had a massive impact on Virgin Atlantic’s fleet. While we’ve seen carriers like British Airways and KLM also retire their Boeing 747s, Virgin Atlantic has also said goodbye to its latest Airbus A340s. Moreover, given the already small size of the British carrier’s fleet, the withdrawal of its seven 747-400s, two Airbus A340-600s (and the four A330-200s mentioned above) represented a loss of around a third of the fleet. Of course, given the massive size of the quad jets, the loss of capacity was much greater.

The airline had planned to retire the 747 from the fleet at the end of 2021. However, this was brought forward due to COVID-19. Virgin Atlantic says its very last 747-passenger flight was flight number VS608 and was a Covid-19 rescue flight from Los Angeles to London Heathrow on March 30, 2020 operated by G-VROS. Reflecting on the end of its 747 operations, Virgin Atlantic said the following on its website:

“We’ve had thirty 747s in our fleet over the years and welcomed millions of customers on board. Our customers have loved flying on them and our employees have loved working on them. Aircraft enthusiasts rave about their shape and of their classic lines, and yet we are talking about an aircraft designed in the 1960s.

The airline retired its 747 fleet in 2020. Photo: Virgin Atlantic

During the 36 years of 747 operation, 30 different 747s have flown for the airline. This includes 14 747-200, 13 747-400 and a single 747-100. A 747-400 continues to fly for fellow Virgin Group member, Virgin Galactic. This special and very lucky jumbo jet was modified after flying for Virgin Atlantic from 2001 to 2015 as G-VWOW. These days, flying under the registration number N744VG, the plane aims to carry a rocket – named Launcher One – under its wing. Dropped at high altitude, this rocket sends satellites into orbit.

Although the A340 is considered a fairly inefficient and expensive aircraft to operate, it appears that some of Virgin’s older four-jet engines have found new homes. Of particular interest are the lone A340-600 operated by Nigeria’s Azman Air and another -600 operated by Venezuela’s Conviasa.

With the arrival of the Airbus A330-900s on the horizon, Virgin Atlantic appears to be closer to the end of its fleet modernization journey compared to other full-service airlines. This is especially the case when we compare the carrier to others – especially those operating older 777s who have been waiting (and will continue to wait) years for the new 777X. Although Virgin Atlantic’s aircraft modernization process covers a 10-year period, it is at least perfectly clear which aircraft are being replaced and the timetable in which things will happen.

Have you flown with Virgin Atlantic Airways recently? What is your favorite aircraft from this fleet? Share your thoughts and opinions by leaving a comment.