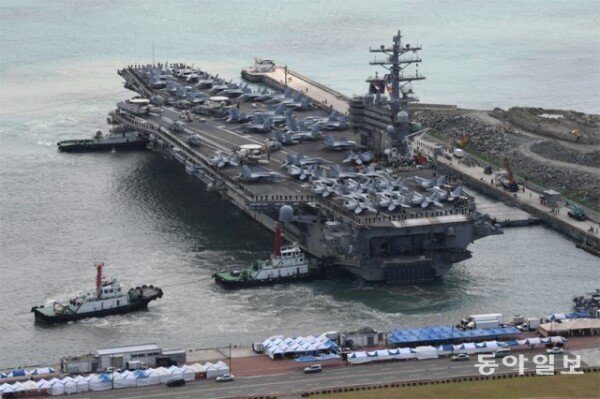 With South Korea and the United States agreeing to bolster the deployment of U.S. strategic assets by resuming operation of the Extended Deterrence Strategy and Advisory Group on Friday, the Ronald Reagan Carrier Strike Group (CSG) will conduct a joint military exercise with South Korea. Marine. It will be the first time in five years that a US aircraft carrier will conduct a joint exercise within the Korean theater of operations.

The Ronald Reagan Carrier Strike Group, which will visit a naval base in the port of Busan later this week, consists of the nuclear-powered aircraft carrier USS Ronald Reagan, the guided-missile cruiser USS Chancellorsville and the destroyer Barry Aegis, among others. The USS Ronald Reagan carries more than 80 aircraft, including F/A-18 Super Hornets and F-35C fighters, and has more air power than many mid-sized nations. When North Korea launched its sixth nuclear test in 2017, three aircraft carriers, namely USS Ronald Reagan, USS Theodore Roosevelt and USS Nimitz, were deployed in the waters around the Korean peninsula and performed a show of force in conjunction with the South Korean Navy.

Analysts say the mobilization of the USS Ronald Reagan heralds the serious deployment of US strategic assets by South Korea and the United States to deter Pyongyang’s seventh nuclear test and the strengthening of their joint military exercises. The two allies have already set up scenarios not only on the types of strategic means to be deployed but also their joint actions according to the type of provocations from Pyongyang and are ready to take immediate action in accordance with the action plan. “I understand that the scenarios suggest that, in the event that North Korea dares to carry out an unclear seventh test, not only various strategic assets, including strategic bombers and nuclear submarines, could be deployed, but the leaders South Korean and US military could issue a joint statement or board a strategic asset,” a source in the South Korean government said.

Amid this development, the US Department of Defense, in an unusual move, released a photo of the fifth Air Naval Gunfire Liaison Company (ALGLICO) the same day, which is stationed in Okinawa, Japan, conducting a joint exercise with South Korean Marines in South Korea.

The company, part of the U.S. Marine Landing Unit, will be deployed to front lines on the Korean Peninsula soon after a war breaks out and provide target coordinates for airstrikes and naval bombardments. ANGLICO conducts exercises on the Korean Peninsula every year, but this is the first time in five years since 2017 that information about the conduct of an exercise and a photo of it have been made public.