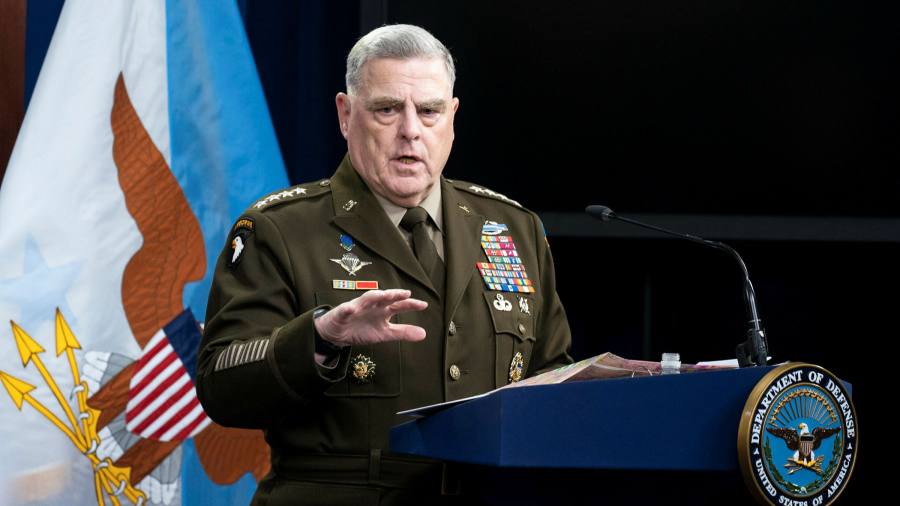 The senior US military officer said China has become more aggressive in intercepting military aircraft and carrying out dangerous aerial maneuvers over the past five years.

General Mark Milley, chairman of the United States Joint Chiefs of Staff, said China was carrying out “dangerous interceptions” against US military planes and ships, and was also targeting Canada, Australia, Japan and other American partners.

“The number of Chinese interceptions at sea and in the air has increased dramatically in five years,” Milley told the Financial Times and the Associated Press aboard his plane as he traveled to Asia for visits in Indonesia and Australia.

The Chinese military has become “significantly more aggressive in this particular region”, he said.

Milley declined to provide specific figures on the total number of incidents, but said the volume of dangerous interceptions – such as when a Chinese fighter jet approaches an American aircraft – has increased in “equal proportion “. It was unclear how much of the rise was due to China’s response to expanding US activity in the region.

In May, a Chinese J-16 fighter flew very close to an Australian spy plane, releasing chaff, including bits of aluminum, which were sucked into the engine of the P-8 surveillance plane.

Milley said he discussed the dangerous interceptions when he spoke with his Chinese counterpart, General Li Guocheng, during the first call between the generals since President Joe Biden took office.

Li responded by warning the United States not to engage in “provocations”. The Pentagon stresses that it operates in international waters and airspace, but China wants the United States to reduce its activity in the region.

The interceptions are just one of many contentious issues in US-China relations, which are in their worst state since the countries established diplomatic ties in 1979.

Biden and Chinese President Xi Jinping are expected to hold a call in the coming days in which they are expected to discuss a range of issues, including Taiwan, which has become a flashpoint.

China has signaled it may respond with more than rhetoric if Pelosi travels to Taipei, raising concerns that Beijing may take military action, such as intercepting his plane with fighter jets. The White House fears that this visit could trigger a crisis in the Taiwan Strait.

Milley traveled to Jakarta on Sunday as part of the Biden administration’s efforts to strengthen alliances and partnerships in the Indo-Pacific. This push is partly intended to reassure countries that the United States intends to maintain a strong presence in the region to counter China.

Before his meeting with his Indonesian counterpart, General Andika Perkasa, Milley said Indonesia was “strategically critical” to the Indo-Pacific given its size and geography. The four-star general is the first joint chiefs chairman to visit Indonesia since Admiral Michael Mullen visited the Southeast Asian country in 2008.

Milley arrived in Sydney on Monday to attend a regional meeting of military leaders. He will be accompanied by Admiral John Aquilino, Chief of the American Indo-Pacific. Milley said the chiefs would discuss the situation around Taiwan, including lessons from the Ukrainian conflict that could apply to the island.

Speaking about the conference, which will be held on Tuesday and Wednesday, Milley said the “vast majority” of countries in the region want the US military to be involved.

“We want to work with them to develop interoperability and modernize our militaries collectively, to ensure that geostrategically we are able to meet any challenge China poses,” Milley said.