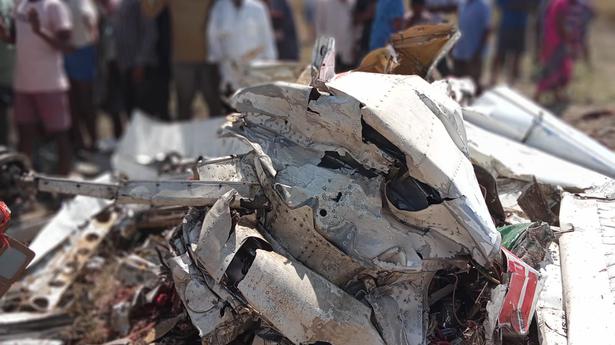 An apprentice pilot from a private aviation training institute was killed when her plane crashed near Thungathurthy village of Peddavoora mandal in Nalgonda district, about 135 km from here, at around 11 a.m. on Saturday .

The victim has been identified as Maheema Gajaraj, 29, from Ayanavaram in Chennai. She was training at Flytech Aviation Academy, based in Hyderabad.

According to District Superintendent of Police Rema Rajeshwari, the trainee pilot took off in her Cessna 152 plane at around 10:30 a.m. from the Academy’s operations institute located on the right bank of the Nagarjunasagar Reservoir, bordering Nalgonda, in the Guntur district of Andhra Pradesh.

Preliminary reports and eyewitness accounts, she said, showed the two-seater plane she was driving alone crashed in the barren lands near the village of Thungathurthy around 10:50 a.m. The reasons for the accident are not yet known.

Eyewitnesses, such as Nageswara Rao and Vanguri Kannaiah of Ramannagudem Thanda in the mandal, speaking to reporters, said the carrier lost control in the air and tipped to the ground.

“It looked like the plane had lost control after hitting something in the air, possibly the high power lines of the nearby 133kv transmission tower. Parts fell all around the place and made a noise explosion,” they said.

Other residents initially believed there were two people in the crash because the damaged aircraft showed two seats and the victim’s remains were unrecognizable.

Mrs. Rajeshwari said that two simultaneous investigations, one by the Directorate General of Civil Aviation and the other led by Miryalaguda Divisional Police, will be conducted to uncover the truth behind the crash.

Flytech Aviation Academy, headquartered in Hyderabad, did not respond to phone calls and text messages regarding the incident.

Ukraine retaliates: the air defenses would have “made havoc” on the Russian planes; civilians take up arms; ex-president ready to fight, swears country will hold back Russian troops ‘forever’