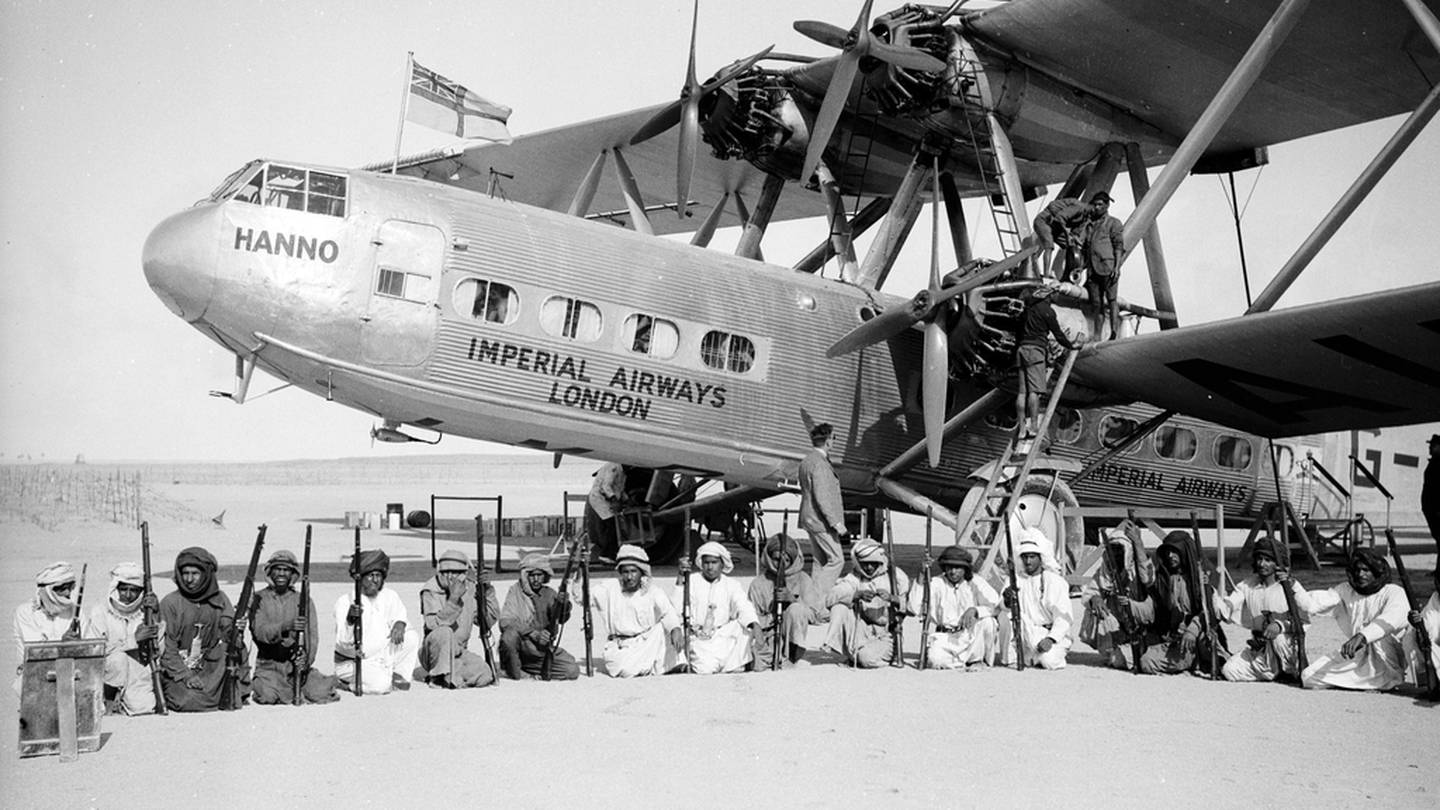 The day the first plane landed in Sharjah

It was late afternoon in Sharjah and the sun was slowly setting over the Gulf.

It sounded like any other day until a low hum sounded from the east.

Then a flash of silver and the roar of four mighty propeller engines as the Imperial Airways plane flew over the desert to land. Sharjah had entered the era of international aviation.

The Handley Page HP42 arrived from Gwadar, in present-day Pakistan, on October 5, 1932, as part of the new hop-on hop-off route between Britain and India that ran along the Persian Gulf coast.

These Imperial Airways routes were established in the early 20th century as a means of maintaining and improving links between Britain and the colonies as aircraft became more reliable and could travel farther.

Sharjah has become a stopover after Britain changed the route from the Iranian coast to the Gulf after a dispute over landing rights.

Nicknamed “Hanno”, the plane traveled at around 160 km/h carrying four passengers and crew.

Sheikh Sultan bin Saqr Al Qasimi, the ruler of Sharjah, his brothers and a crowd of locals came to view the plane, while passengers were escorted to tents for the night as a guesthouse was still under construction ,

“The tents…were carpeted and furnished and adequate sanitary facilities were in evidence,” Sheikh Sultan wrote in his book. Sharjah Air Station: Between East and West. “A variety of good quality food was also available. Passengers all praised the high quality of service received.

The flight from India to London, including the stopover in Sharjah, then took around six days with a one-way ticket costing around £95 ($106), or almost £5,000 ($5,600) in cash. today, according to Nicholas Stanley-Price, author of Imperial Outpost in the Gulf: Sharjah Airfield from 1932 to 1952. Airlines carried passengers, mail and government officials, so it was clearly a rarefied world.

But what was it like to be a passenger? A rare account two years after the first plane landed provides a clue. ‘Imperial Journey’, written by a ‘Mr Bunbury’ and published in the Gazette of the Royal Aero Club offers a glimpse into this bygone world of aviation.

“It can accommodate 24 passengers in two compartments, one forward of the wings and one aft. In the middle is a lavatory and the steward’s kitchen and opposite is the baggage room,” Mr Bunbury wrote of life aboard the Handley Page as it flew to Sharjah in 1934.

“A catwalk as wide as that of a railway dining car passes through the center and the seats are arranged like a Pullman car [1930s era US railway carriage] in pairs with a table suspended in between.

There were thought to be eight passengers and they enjoyed a meal and drinks before landing in Sharjah. Mr Bunbury praised the facilities he found.

“Shajar [Sharjah] is a desolate place in a desert about a mile from the small town of the same name. The fort is a concrete square with a loophole terrace all around and steel gates at the main gate with wireless masts, searchlights and an Arab guard armed with rifles provided by us and belts full of cartridges. Passengers are not allowed to exit the compound,” he wrote.

“Inside the fort, there are rooms with electric lights and quite comfortable. I took a bath and shaved, then took a walk. The outgoing mail plane arrived after dark at a quarter to seven and about eight passengers joined us for drinks and dinner. Bed early and I slept well.

He even found time to pet one of the baby gazelles that roamed the airfield at the time.

“One got me scratching my head and seemed to like it. They’re obviously pets, very graceful little animals and I wish I could have brought a baby one for Gill.”

Most of the Western-style food and drink served to passengers was imported from India, Stanley-Price noted.

“Even in times of war, the supplies were adequate (unlike the very limited food supplies available to the people of Sharjah),” he said.

“Raymond O’Shea who arrived as the new superintendent in 1944 had for his first lunch: hors d’oeuvre, soup, fish, chicken with beans and potatoes, pudding, cheese and cookies and coffee.”

Hanno, meanwhile, left Sharjah the next morning after the first flight, but the meaning was clear.

Sharjah Air Station later hosted a cinema, hotel and became a major Royal Air Force base until Britain left the Gulf in 1971. Airport amenities would also include a weather center and telegraph and postal services. It served for a few years as the emirate’s main airport until it was replaced by today’s modern facility. Imperial Airways would eventually become what we know as British Airways today, but its legacy lives on.

The original Imperial Airways control tower and guest house are now part of the Al Mahatta Museum, which explores the rich aviation history of the area, while King Abdul Aziz Street was once the runway.

An exhibition dedicated to the first flight was inaugurated at the Al Mahatta Museum on October 3. ‘Sharjah Air Station: The First Landing 90 years ago’ features rare photographs, the endorsement agreement and a video exploring the history of the flight.

“The exhibition is a great way to further appreciate the history of the UAE’s first airport and the Emirate of Sharjah’s early realization of the importance of intercultural dialogue and mobility by opening the first airport of the region,” said Manal Ataya, Managing Director. of the Sharjah Museums Authority.