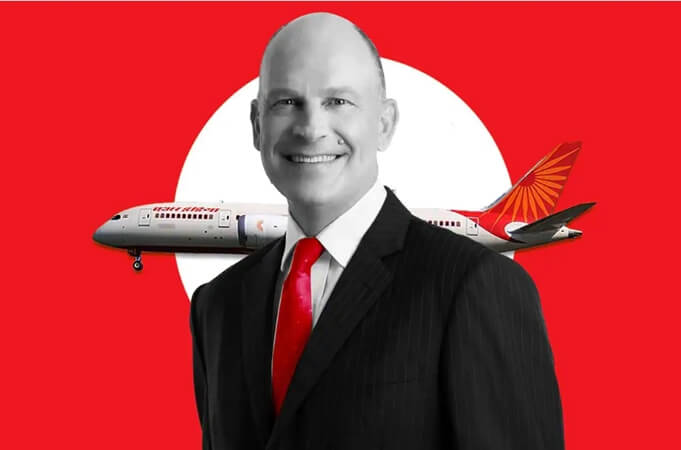 The Tatas’ frantic search for a CEO that began the day they welcomed Air India home and spanned over 100 days since then has finally come to an end. “Who is the new CEO of Air India” has been trending on the internet and social media ever since Air India Chairman N. Chandrasekaran officially revealed the name. Air India’s new CEO will take office on June 15, 2022.

The Tata Group, a salt to software conglomerate, has appointed Campbell Wilson, an industry veteran with 26 years of experience in international aviation, as CEO and Managing Director of Air India. He is currently CEO of Scoot, Singapore Airlines’ wholly-owned low-cost subsidiary in Asia-Pacific. While announcing the rowdy airline’s new chief, N. Chandrasekaran said:

“I am delighted to welcome Campbell to Air India. He is an industry veteran having worked in key global markets spanning multiple functions. Additionally, Air India would benefit from its additional experience of building an airline brand in Asia. I look forward to working with him to build a world-class airline…”

Originally from New Zealand, Campbell Wilson joined Singapore Airlines in 1996. He spent the first 10 years of his aviation career in Auckland. Subsequently, he began to rise through the management ranks of the Singapore Airlines Group (SIA). His first promotion was Vice President of Airline Operations in Canada. He was appointed general manager of operations in Hong Kong and Japan in 2008 and 2010 respectively.

Campbell Wilson’s career at Singapore Airlines took a major turn in 2011 when he became the founding CEO of Scoot, which began operating low-cost flights on short and medium-haul routes. in June 2012 as a subsidiary of SIA. He propelled Scoot to new heights until June 2016 when he was promoted to Senior Vice President of Sales and Marketing for SIA Group. He welcomes the opportunity to work with Tatas, one of the world’s most prestigious brands. At the same time, the decision to leave the SIA group where he built his career and Scoot is not an easy decision for him.

“Air India is on the cusp of an exciting journey to become one of the best airlines in the world, delivering world-class products and services with a distinct customer experience that reflects Indian warmth and hospitality. I am delighted to join Air India and Tata colleagues in the mission to achieve this ambition…” said the new CEO of Air India.

“The Tatas have already started working on upgrading the fleet, improving the quality of in-flight service, renovating the cabin, punctuality, etc. According to reports, Air India’s on-time performance was 91.2 in March 2022; an increase of 28% after its takeover by the Tatas. What we expect from the new CEO of one of our partner airlines is the expansion of Air India’s non-stop flights to more destinations with the growing number of Indian immigrants to the United States and other countries. ‘other countries.“said the Business Development Manager of Indian Eagle, a leading airline ticketing agency offering the best Air India fare offers and the cost-to-cost air ticket booking of other airlines.

The appointment of Campbell Wilson as CEO of Air India seems to aviation experts that Singapore Airlines has returned the favor to JRD Tata, the founder of Air India and the architect of Indian aviation. to the government of Singapore in the 1970s. In Air India’s heyday, legendary aviator and industrialist JRD Tata was approached to design Singapore Airlines’ inflight services, according to various sources. In short, Air India was a pioneer for Singapore Airlines and other Asia-Pacific carriers in the golden age of air travel.

All You Need To Know About Air India’s Namaskar Sewa

Nepal Airlines to operate Bhairahawa flights in A320

The military flew surveillance planes over the convoy, contrary to orders