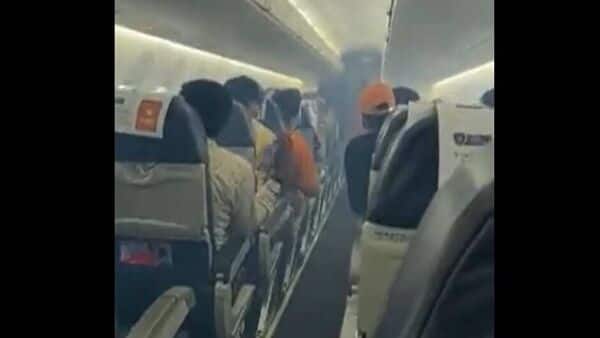 Flight SG-2862 which took off from Delhi at 6.15am for Jabalpur, landed at 7.00am at Delhi airport. “On July 2, 2022, the SpiceJet Q400 aircraft was operating SG-2962 (Delhi-Jabalpur). Passing through 5000 feet, the crew noticed smoke in the cabin. The pilots decided to return to Delhi. The The plane landed safely in Delhi and the passengers were safely disembarked,” a SpiceJet spokesman told ANI news agency.

Saurabh Chhabra, a passenger from Delhi to Jabalpur seated at 12C, told ANI: “Shortly after take off, there was a panic situation on the plane as the passengers were having difficulty breathing in the air. ‘inside.’

The agency also shared a video showing how passengers fanned themselves with newspapers and airline booklets as smoke poured into the cabin.

This is the second incident in two weeks when a fire occurred on a SpiceJet aircraft. On June 19, a similar incident occurred on the Patna-Delhi flight.

On June 25, the SpiceJet Q400 aircraft was on flight SG-3724, PAT – GAU. During the take-off run, the fuselage door warning light was illuminated. Subsequently, the takeoff was aborted and the aircraft returned to the bay.

A similar incident was reported on May 25, some SpiceJet systems experienced an attempted ransomware attack which impacted and slowed flight departures.

On May 4, SpiceJet flight SG-331 operating from Chennai to Durgapur on May 3 returned to Chennai after take-off due to a technical problem. Also at this time, the aircraft landed safely.