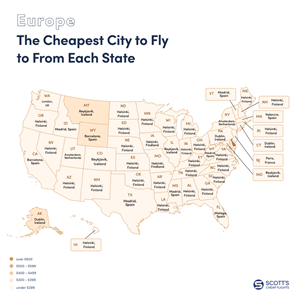 Scott’s Cheap Flights maps the cheapest places to fly from

Portland, Ore., Nov. 16, 2021 (GLOBE NEWSWIRE) — Scott’s Cheap Flights, a service that tracks airline ticket prices and alerts its more than 2 million members to great airfare deals, released the data. of all the offers they sent from each airport in the United States to find out which destinations are the cheapest to fly to from each state. Whether you have a list of destinations in mind or just want to catch the cheapest flight to the continent of your choice, these are the cheapest fares to destinations outside of the 50 states that Scott’s Cheap Flights has found across United States.

Here are some examples :

– The cheapest European city from Arizona and Nebraska is Helsinki, Finland, while the cheapest from Illinois is Reykjavik, Iceland.

– The cheapest Asian city from Texas and Louisiana is Tokyo, Japan, while the cheapest from Nevada and Georgia is Hong Kong.

Since 2015, Scott’s Cheap Flights has helped members around the world achieve their travel dreams. We combine sophisticated software and human flight experts to uncover wrong flight deals and fares up to 90% off and email them to our over 2 million members. Unlike fully automated rate alert services, every offer alert we send to members has passed a rigorous quality assessment by our team to ensure it’s worth members’ hard-earned money and travel time. limit. Our members save an average of $200 on economy class domestic flights, $550 on economy class international flights and $2,000 on business and first class international flights. Every month we receive over 1,000 testimonials from happy members who have had good results on a flight through our email.

How to Find Cheap Flights for the Thanksgiving Vacation

How to book cheap flights on Skyscanner