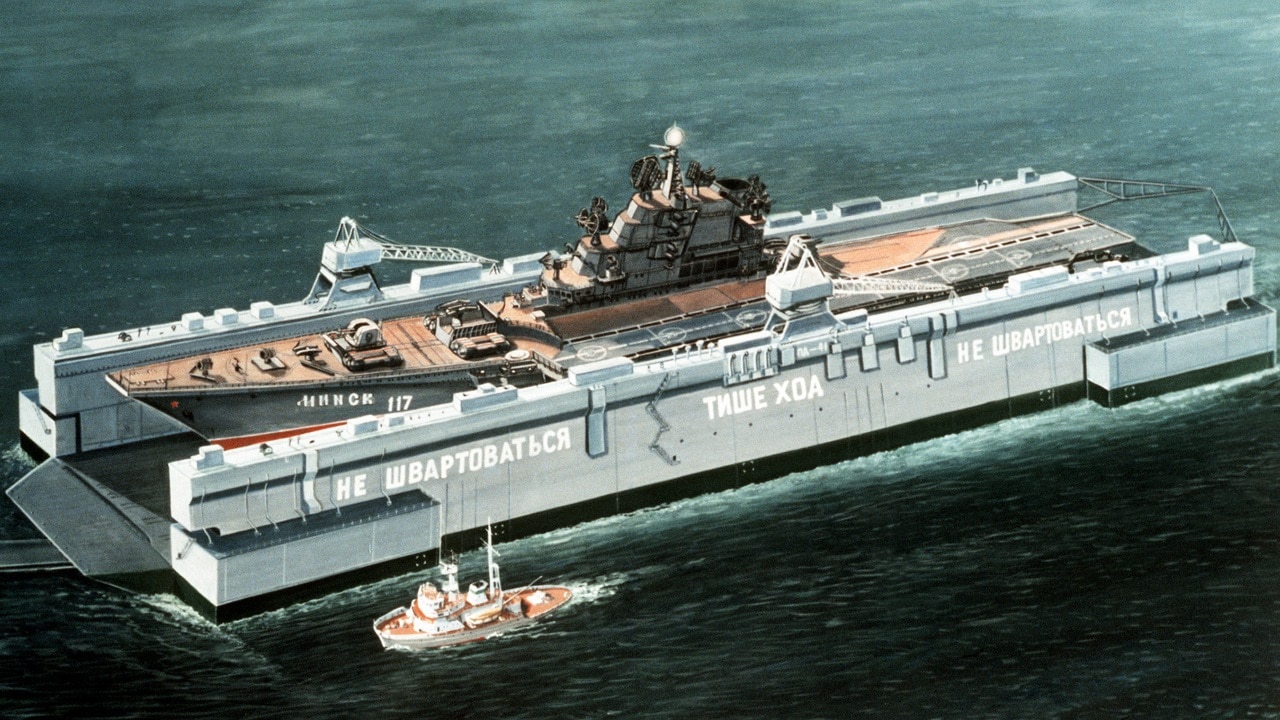 The four Russian kyiv-class aircraft carriers had a very simple objective: to attack the US Navy aircraft carrier battle groups – At the end of the Cold War, the Soviet Union produced a number of unique aircraft carriers. Known as the kyiv class, the carriers were the Soviets’ first foray into the world of fixed-wing naval aviation and the only Soviet carriers to become fully operational. The story of kyiv’s aircraft carriers is also the story of a land power forging its way to becoming a naval power, seeking to achieve a fleet that could challenge the mighty US Navy.

The kyiv-class aircraft carriers have their origins under the tenure of Admiral Sergei Gorshkov. Appointed by Nikita Khrushchev as Commander-in-Chief of the Soviet Navy in 1956, Gorshkov served in that position for a remarkable twenty-nine years. He oversaw the expansion of the Soviet Navy from a strategically insignificant force in the years following World War II to a well-rounded force capable of projecting power into the Third World, a problem that became evident during the Cuban Missile Crisis when the Soviet Navy had no long-range strike force it could send to counter the US naval blockade of Cuba.

The kyiv-class aircraft carriers are the result.

While Gorshkov spent a huge portion of the Soviet Navy’s construction budget on submarines, especially ballistic missile submarines, he wanted a balanced force capable of projecting power overseas. Faced with the imminent deployment of Trident C-3 missiles launched by longer-range submarines, the Soviet Navy would have to operate even further from the Eurasian continent to counter them. This would pit the Soviet Navy directly against the operational forces of the US Navy.

At the same time, more and more countries fell into the Soviet orbit, providing the USSR with port facilities. Cuba in the Western Hemisphere, Vietnam in Asia, Angola in Africa, Syria, Egypt, Yemen and Libya in the Middle East, and Ethiopia and Somalia in the Horn of Africa all provided anchorages for the Soviet Navy to visit and demonstrate Brotherly Socialism. If the Soviet Union wanted to retain and even expand a network of allies overseas, it would need a naval force, complete with capital ships, capable of visiting those allies and engaging in demonstrations. visible support.

The four kyiv-class carriers were part of a major shipbuilding effort designed to fulfill both sets of tasks.

In 1975, Kyiv appeared, followed by her sister ships Minsk (1978), Novorossiysk (1982), and Baku (1987). All four were built at Nikolayev South Shipyards in Ukraine, the Soviet Union’s only builder of large surface warships. Like the Moskva class before them, the ships were a mix of ship types, with the forward half resembling a missile cruiser and the rest of the ship resembling an aircraft carrier. At 899 feet, the ships were about 85% longer than the US Navy’s newer Nimitz-class aircraft carriers.

The forward half of the ship had considerable firepower, with eight SS-N-12 “Sandbox” anti-ship missiles. Each SS-N-12, known as 4K80 in the Soviet Union, carried a 2,000 pound high-explosive warhead or a 350 kiloton nuclear warhead. The Sandbox had a range of 341 miles, with targeting data provided by land-based Tu-95 maritime patrol aircraft or kyiv Air Wing helicopters. The nuclear warhead option would have been particularly effective against US carrier battle groups, with a single missile having to penetrate US defenses to ensure the carrier’s destruction.

The real innovation found in the kyiv class, however, was the ship’s aviation capabilities. The ships featured a six-degree angled flight deck that started parallel to the deck and ran to the stern; in this way, the aircraft carrier’s flight deck could be two-thirds of the ship’s overall length while half the ship retained traditional cruiser features. The carriers were designed to operate up to twenty-two Yak-38 “Forger” fighters, which used two downward-pointing engines and one thrust-vectored engine aft to take off and land vertically. At sea, however, the ships typically carried up to thirteen Forgers and a dozen Ka-25 “Hormone” helicopters acting in anti-submarine missile targeting above the horizon for SS-N missiles -12 and search and rescue roles. .

The breakup of the Soviet Union left the ships in the hands of the Russian Federation, which could not afford to maintain them. Worse, the shipyards and spare parts of Nikolayev South were now in a separate country, Ukraine. The entire kyiv class was retired and an unnamed fifth ship was never built. Kyiv was sold to China where it became a hotel, while Minsk apparently part of a theme park. Novorossiysk was dismantled in Pohang, South Korea in the 1990s.

Of the four mighty ships, only one, Baku, remains. The most advanced ship in the best condition of the four, Baku has been retained, renamed Admiral Gorchkov, then sold to the Indian government to be converted into a complete aircraft carrier. Converted by Russian shipyards Sevmash in the 2000s and 2010s, it is now known as an aircraft carrier Vikramaditya and is the flagship of the Indian fleet.

The kyiv-class aircraft carriers were an ambitious attempt to provide Russia with a powerful ship capable of taking on American aircraft carriers while hunting down submarines that posed a threat to the Soviet homeland. Because the responsibilities were split between two very different people, their ability to do either was severely curtailed. Ships that are half one type of ship and half another, such as the WWII Ise in Japan–class aircraft carriers/battleships, are generally a failure to be both. The kyiv class was no exception.

Kyle Mizokami is a San Francisco-based defense and national security writer who appeared in the Diplomat, foreign policy, war is boring and the Daily beast. In 2009, he co-founded the defense and security blog Japan Security Watch. You can follow him on Twitter: @KyleMizokami.