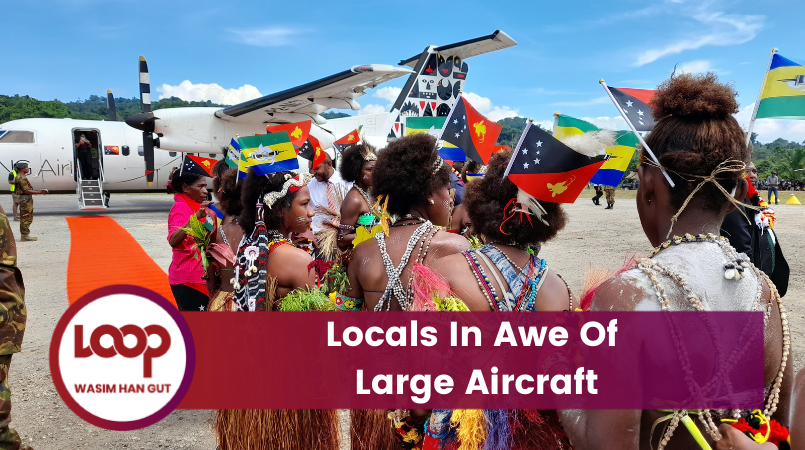 He was stunned when he saw a PNG Air Dash 8 circle above the newly renovated Finschhafen Airport.

“I was born in 1945, after World War II, when soldiers started going back to where they came from,” said Asap, from Godowa.

“When the Australian government was looking after us, I saw small planes landing here.

“They just leveled the old airport and we saw a big plane landing.

“When I saw the big plane, I was so happy,” he continued.

“It was my first time, and also a first for our young people.

“Since 1975, I have not witnessed such an event until now, when my time is almost up.

“My peers and I were pretty emotional.”

PNG Air’s Dash 8-100 made its maiden flight to Finschhafen on Sunday, April 24and.

It returned two days later with the Prime Minister and his delegation on board, who officially inaugurated the new terminal.

More than 40 neighborhood councillors, sing sing groups, schools and residents waited patiently for the Prime Minister to officiate at the opening of the Finschhafen airport terminal on Tuesday.

All the singing and dancing stopped when everyone looked up at the sky, transfixed by PNG Air’s signature tail livery.

Some of the elders had tears in their eyes as the Dash 8-100 plane came to a stop on the ground.

According to locals, the last time a Dash 8 landed there was in 2013, when the former prime minister visited.

The upgrade, courtesy of the Finschhafen District Development Authority, aims to bring regular flights that will serve more than 20,000 people from Finschhafen and the neighboring districts of Kabwum and Tewai-Siassi.