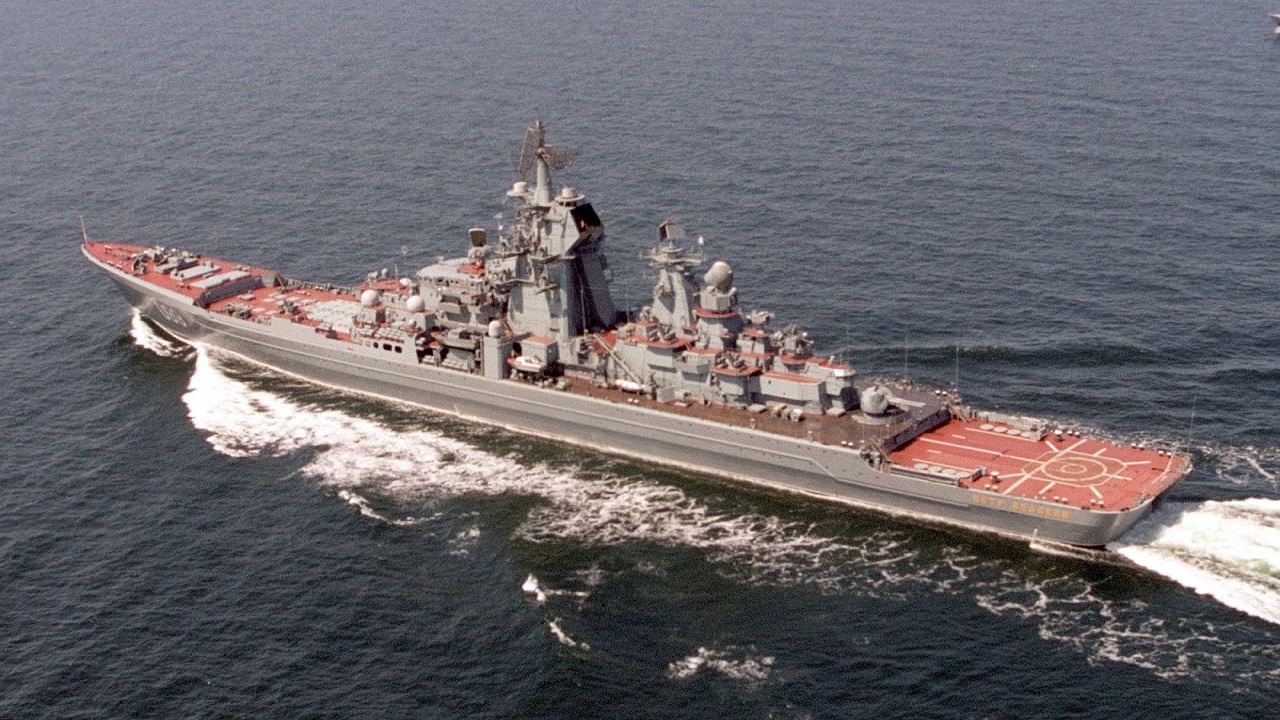 Kirov-class battlecruisers are true Cold War monsters created during the times of the Soviet Union. And yet, while ships on paper look like they could be a powerhouse, there’s quite a bit of uncertainty about their future: It has been more than 27 years since the last battleship of the United States Navy, the Iowa-USS class Missouri (BB-63), was decommissioned and struck from the rolls. The era of the big-gun battle wagons is almost over – except for some backslidden thinkers in the Kremlin, who still cling to the old ways. Apparently they didn’t get the memo that these large capital warships are little more than large floating targets.

Even the sinking of the missile frigate Moscowflagship of the Russian Navy’s Black Sea Fleet, probably did little to change the minds of Russian leaders.

Currently two ex-Soviet era Kirov-class battlecruisers remain in service with the Russian Navy, including the Piotr Veliky (peter the great) – formerly the Yuri Andropov – the flagship of the Northern Fleet; and Admiral Nakhimovwhich is currently undergoing refurbishment.

When the Soviet Union launched its Project 1144.2 missile cruiser Kirov in December 1977, at 24,401 tonnes (28,000 tons), she was the world’s largest commissioned warship outside of aircraft carriers. Considered reminiscent of battle cruisers of a bygone era, the new ship was actually quite modern.

The warship was equipped with a formidable array of sensors, including air/surface search radar, fire control radar, and even hull-mounted sonar. The propulsion system was a combination of nuclear power and steam turbine, with two nuclear reactors coupled to two oil-fired boilers, which superheated the steam produced in the reactor plant to increase the power output available during operation at great speed, while also providing essentially unlimited range.

The main machinery was arranged in three compartments, one compartment housing two nuclear reactors; while the other two housed the geared turbines and steam boilers respectively.

As the leader of a new class of ships, Kirov was originally designed as a large ASW platform to seek out and engage enemy ballistic missile submarines. It was equipped to carry three “Kamov” Ka-25 “Hormone” or Ka-27 “Helix” anti-submarine warfare (ASW) helicopters with two crews assigned to each aircraft.

The primary armament of Kirov-class was the P-700 “Granit” (SS-N-19 “Shipwreck”) long-range anti-ship missile. A total of 20 missile launchers were installed under the upper part, mounted at an angle of 60 degrees. The vertical launch capability allows ships to perform saturation missile attacks against targets such as carrier battle groups. The addition of the anti-ship missile system greatly expanded the role of the Kirov-class for engaging large surface targets and providing air and anti-submarine protection to naval forces.

Each of the Missile Cruisers/Battlecruisers of the Kirov-class carried some 727 sailors, including officers, along with an additional 18 aircrew. As flagship, another 15 personnel were usually assigned to warships.

Despite the offensive capabilities of these ships, they were seen as a major investment for cash-strapped Moscow. As a result, at the end of the Cold War, it was expected that in the event of hostilities, the Kremlin would hesitate to deploy one of the ships in waters where it could be easily attacked. Thus, due to their large size, the Kirov-class battlecruisers can be seen as a wasted effort.

Simply put, it would be too vulnerable to be safely deployed in its primary role, and given that the Russian Navy has no ships that could provide reasonable air cover today, that fact remains largely unchanged.

Two of four completed (of five planned) Kirovclass battlecruisers – including lead ship Admiral Ushakov (ex-Kirov) and Admiral Lazarev (ex-Frunze) – originally slated for refit starting in 2010, but in 2015 the vessels were determined to be past their service life.

However, the third ship, Admiral Nakhimov (ex-Kalinin) is currently undergoing a redevelopment – but when, and more likely IF who’s ever finished is now a huge question. Commissioned in 1988, it was renamed in 1992 in honor of Pavel Nakhimovthe Admiral of the Imperial Russian Navy who commanded naval and ground forces during the siege of Sevastopol during the Crimean War in the 1850s.

At this point, the warship has actually spent more time upgrading than at sea, so while the potential capabilities have long been touted by Moscow, the question must be asked whether the efforts will actually materialize. By the end of the Cold War, the battlecruiser – much like her now-retired sister ships – had rarely been deployed. It entered the Sevmash shipyard in 1997, and since 1999 it has been permanently moored, awaiting the completion of the refit.

Work only really started in 2013, but it was last June that the head of Russia’s United Shipbuilding Corporation, Alexei Rakhmanov, announced that repairs to the missile cruiser had reached the 50% mark. . He said at the time that the repairs were expected to be completed by the end of 2022, but as things stand it could take several more years before Admiral Nakhimov is able to resume service.

Although these experts suggested it would give the Russian Navy another powerful asset, the truth is more likely that it would just be a large target that would be quickly sunk by an enemy in wartime. Perhaps she should instead become a floating museum – that would be far more fitting than watching her sink with all her might, which is likely her fate if ever she were to be taken out during an armed conflict.

Today’s editor for 1945, Peter Suciu is a Michigan writer who has contributed to more than four dozen magazines, newspapers, and websites. He writes regularly on military hardware, the history of firearms, cybersecurity and international affairs. Peter is also a Contributing author for Forbes.