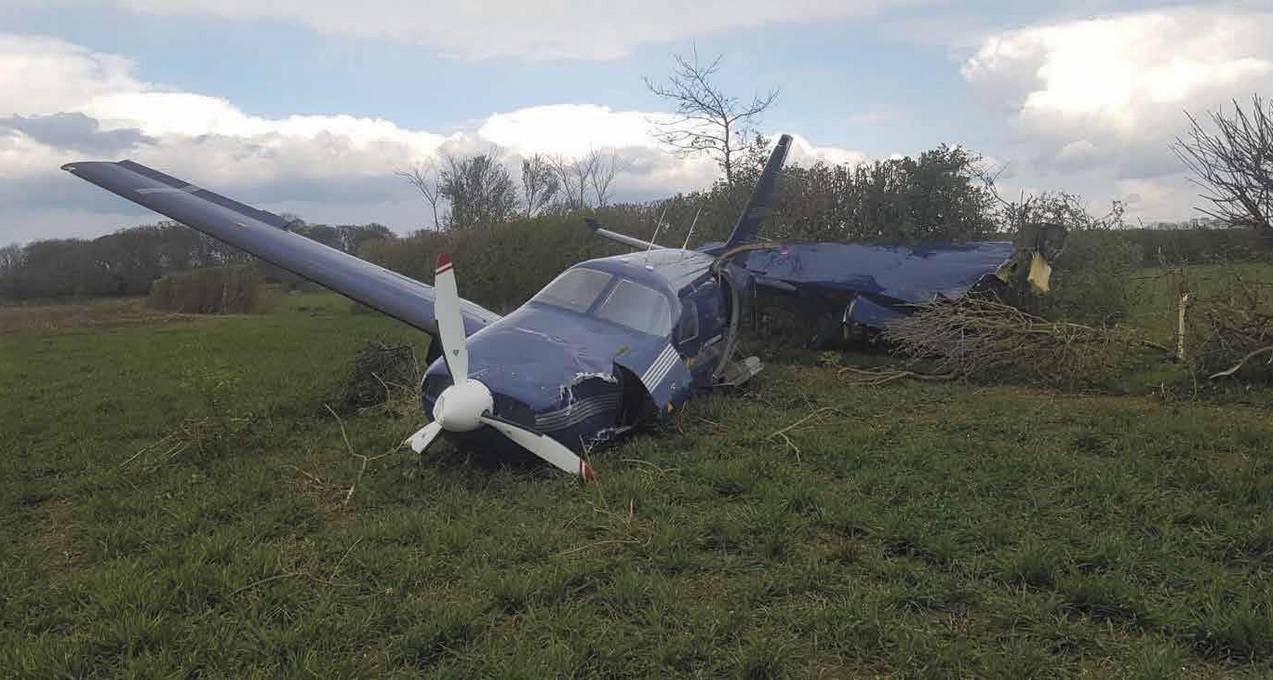 Britain’s AAIB has released its final report into the crash of ZeroAvia’s hydrogen-powered test plane, which was destroyed last year. So what happened?

Many see hydrogen, in fuel cell form or as fuel in a gas turbine, as a long-term solution to decarbonizing aviation. This will take time as the technology has to prove itself AND reach certification status. Fuel storage requirements are so different from existing aircraft that a purpose-built design should be the best option. However, some companies hope to develop retrofit kits for existing aircraft fleets.

ZeroAvia is one such company and has an aggressive development schedule. But development issues with new technologies are common. So perhaps inevitably, we’ve had a hydrogen plane crash before. This was ZeroAvia’s first development testbed. The aircraft started life as the Piper PA-46-350P Malibu Mirage. Instead of its turbocharged internal combustion engine, its propulsion system consisted of two motors, driving the same propeller, and a hydrogen fuel cell.

In addition to the hydrogen fuel cell, the plane was equipped with a high-voltage battery, which played a role in this forced landing. Above all, the test team recorded data from its flights and had a high-definition camera overlooking the dashboard. The investigators therefore had a lot of interesting information, as well as the statements of the two crew members. The plane had a pilot and a flight test observer, who was the chief engineer of the hydrogen fuel cell. 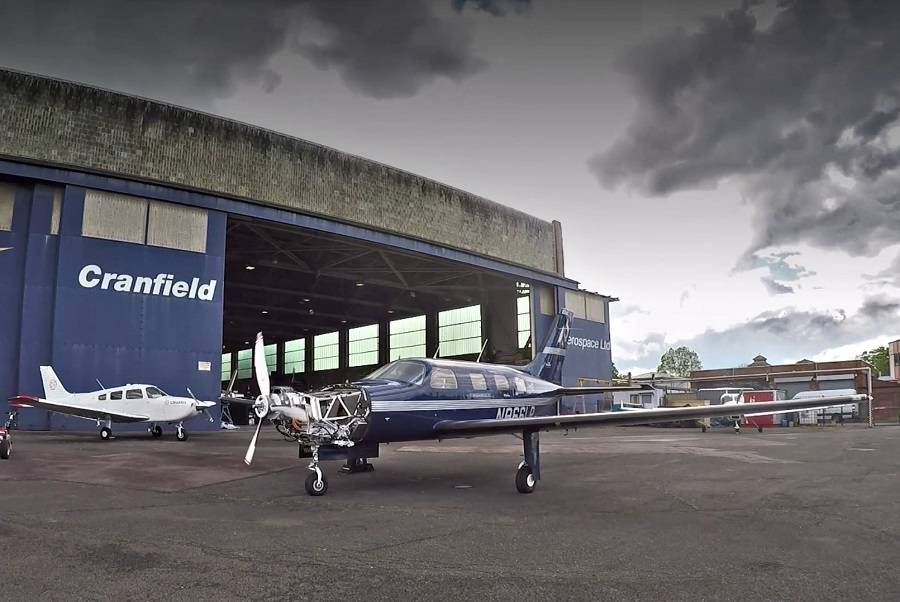 The crew had performed another test flight with their hydrogen test bed, before the plane crashed. For the accident flight, the crew performed their run-up only using the hydrogen fuel cell (HFC). One of the challenges they faced was keeping the HFC temperature within a specific range. After the run-up, the pilot turned on the battery. This way, the plane would be powered by both the HFC and the battery, for takeoff.

As part of the test, the crew would reach cruising altitude and then switch to HFC-only power. Before the crash, the goal was to test the plane with another hydrogen tank. The next step would have been to perform cross-country flights. But at this stage, the aircraft would only fly within a limited radius around the ZeroAvia team at Cranfield Airport (EGTC). Additionally, the test flights were to take place when no other aircraft were flying nearby. 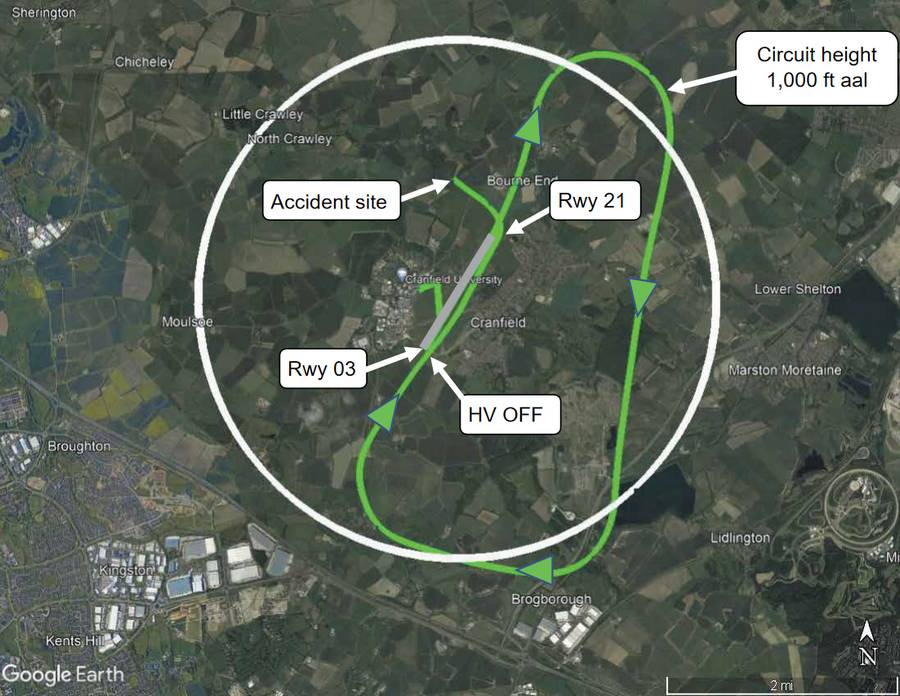 The test area, the airport and the crash site. Image: AAAB

The plan was for the crew to shut off the high voltage (HV) battery at the end of the downwind leg. This should have allowed them to glide to the runway, in case of trouble. But as the crew manages their systems, they delay turning off the HV battery until they are above the runway threshold, still at circuit altitude.

The above was a factor in the forced landing, another being an electrical surge, as the crew switched the plane to hydrogen only. It appears that the two electric motors were momentarily without power. But with the pinwheel propeller, the motors now functioned as generators, sending a voltage spike (surge) back to the inverters. 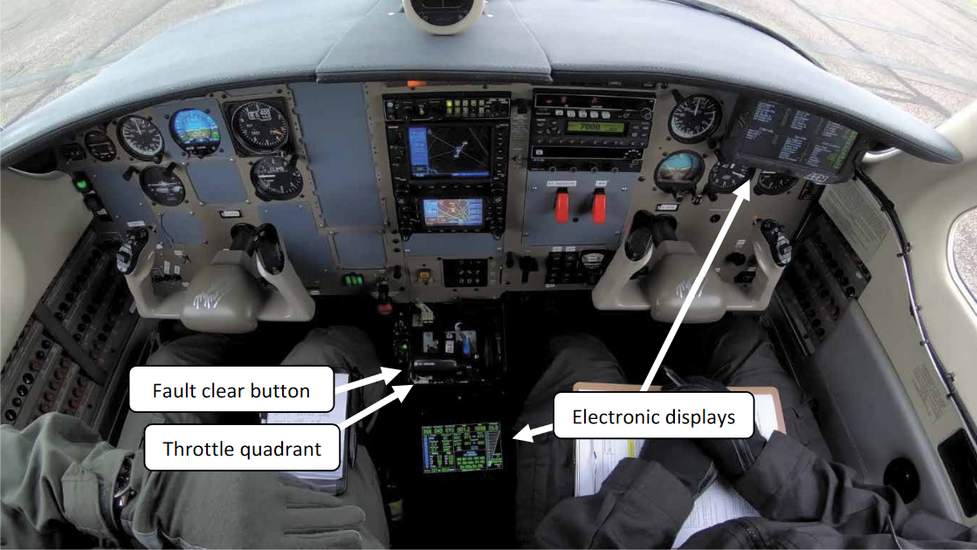 Accidental landing of a hydrogen-powered plane – A locking of systems?

In order to protect its systems, the aircraft incorporates “lock-out” safety mechanisms to protect the inverters from overvoltages. The tip of the pinwheel propeller was high enough to trigger this safety feature. The crew tried several ways to reset the plane’s systems before the crash, including turning off the hydrogen fuel cell.

The observer/engineer realized that the voltage remained too high for the system to reset successfully. After saying this, the pilot said “We need to do something fast”. As they tried to reset their systems again, the plane reached the end of the runway, now 320 feet above the ground.

The pilot made a MAYDAY call, then initiated a turn to position himself for a landing. But he immediately recognized that the plane was too low. So he turned to the field where he would crash the hydrogen test plane. With the landing gear and flaps extended, the pilot touched down smoothly, about one-third down in a grass field. The aircraft was traveling at 87 knots at touchdown.

But the field just wasn’t long enough, at around 445 meters (1,460 feet). The plane crossed a hedge, then a ditch, losing its nose wheel and its left wing in the process. The loss of the wing meant that the aircraft lost its left main gear. Fortunately, the aircraft’s hydrogen fuel cell, battery and other critical systems suffered no damage in the crash. The two occupants were not injured. 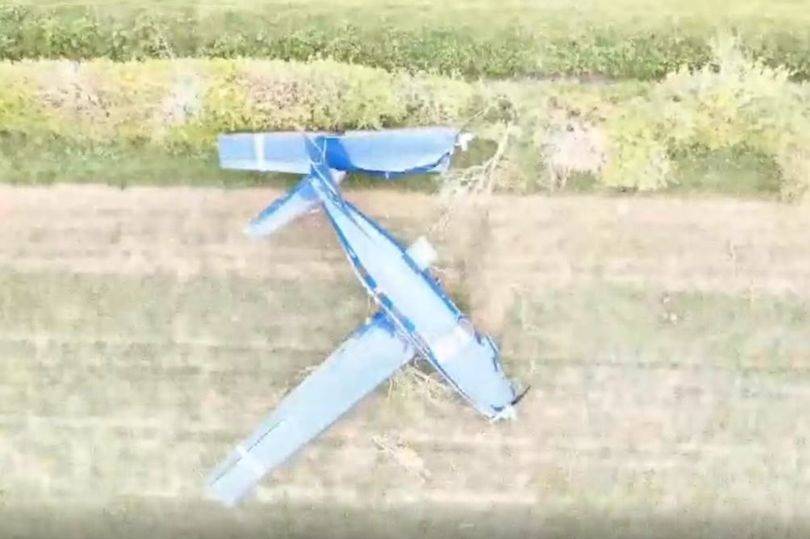 Photo taken by a drone of the crashed plane. (Image: Bedfordshire Fire and Rescue Service)

After the crash – No more hydrogen planes?

Airport firefighters rushed to the scene of the crash. When they did, the observer briefly returned to the aircraft to purge the hydrogen tank. He also disconnected the battery, securing the plane.

The AAIB report goes into great detail, analyzing the aircraft’s systems and the test team’s procedures. He determined that the team had not done enough ground testing on the effects of a windmill propeller “back-tension” event. Therefore, the procedure to clear the system “lockout” was ineffective. 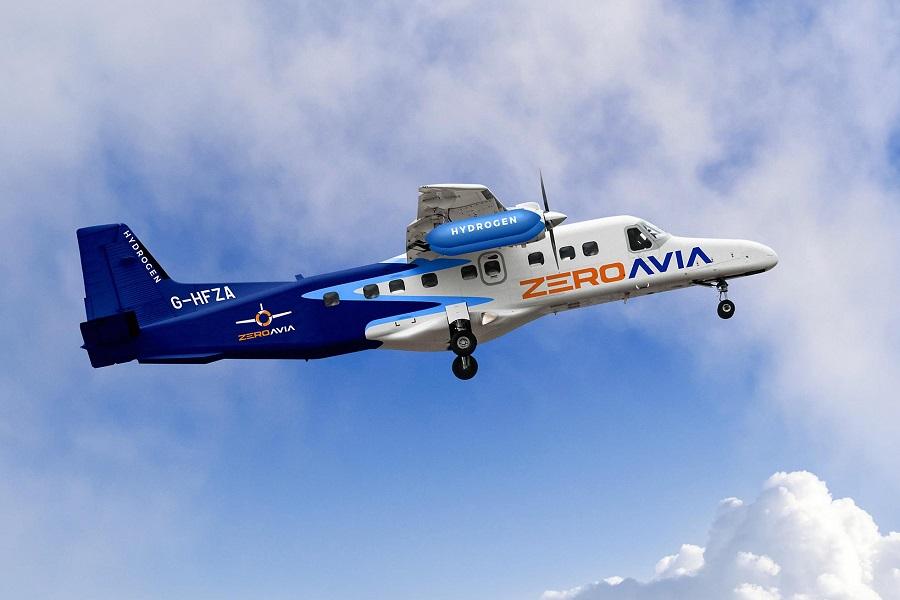 Furthermore, the team had not investigated a previous similar event or revised its risk assessment after this one. The position of the aircraft during the shutdown of the HV battery clearly played a key role. Additionally, COVID-19 restrictions have limited the presence of key people on the team as some flight test parameters have changed.

The hydrogen test plane crash-landing occurred on Flight 86. Since then, ZeroAvia has turned its attention to larger test planes. The next is a Dornier 228, while Alaska Airlines donated one of its Dash-8-400s to the project.

Spyros Georgilidakis graduated in business and management. He has 14 years of experience in the hospitality and travel industries, as well as a passion for all things aviation and travel logistics. He is also an experienced writer and editor for online publications and a licensed professional drone pilot.

Alaska Airlines Sale: Get cheap flights across the US, including Hawaii

Could the market be wrong about Air Transport Services Group, Inc. (NASDAQ:ATSG) given its attractive financial outlook?