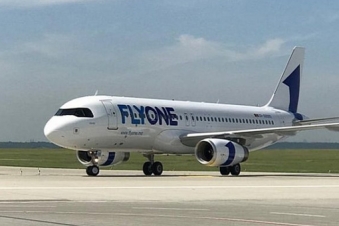 Flyone Armenia to offer cheap flights to Europe and Asia

PanARMENIAN.Net – The Civil Aviation Authority of Armenia issued the National Air Operator Certificate to Flyone Armenia, which means that the company will launch flights from Yerevan to European and Asian destinations very soon, the carrier said in a statement Thursday, October 28.

The certificate enables Flyone Armenia to do everything possible so that in the near future Armenian citizens can travel through Europe and Asia at affordable prices and with maximum security, according to the statement.

“To date, Flyone Armenia has invested more than 60 million euros in the Armenian market, which contributes to the growth of the country’s economy. In addition, we have created new jobs, planning to have a team of more than 135 employees, who will be paid salaries higher than the country’s average. In the future, we aim to grow both in terms of number of employees and fleet, ”the company noted.

“The airline’s fleet consists of Airbus A320 aircraft, on which we will operate both scheduled and charter flights. Each aircraft has 180 seats and meets all of the Transport Association’s safety standards. International Airline (IATA) and EASA. In addition, in the event of a pandemic, the aircraft is equipped with HEPA air filters, which remove 99.97% of viruses and bacteria. “

Yerevan Airport is the point of departure and arrival of the carrier to Moscow, Tehran, Lyon, Paris, Tbilisi, Kutaisi, Krasnodar, Istanbul and Tel Aviv.

Mircea Maleca, chief executive of the company, said they are currently working on launching ticket sales.

Airline Services (ATSG) Profits Expected to Increase: What to Know Before Next Week’s Release