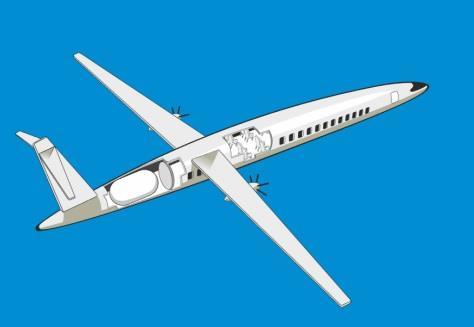 Full adoption of liquid hydrogen aircraft on all replaceable routes by 2050 would cap passenger aviation emissions at 2035 levels, but not reduce them, according to analysis published by the International Council on Clean Transportation, a non-profit organization based in the United States.

Its white paper stresses that this is based on the “most optimistic” assumptions of fuel and fleet turnover, and 100% adoption would represent a “radical case” – adding that “realistic” adoption rates would be d about 20 to 40%.

The organization’s analysis models the performance of potential 70-seat turboprop and 165-seat narrowbody designs, with liquid hydrogen tanks in the fuselage, indicating that they could respectively operate over ranges of up to at 760 nm (1,400 km) and 1,830 nm (3,400 km).

Liquid hydrogen turboprops could replace “almost all” current turboprop operations, he says, but these represent only a small fraction of passenger transport.

He recommends that manufacturers focus on narrow-body designs to provide the highest potential emissions coverage, given the extent to which these aircraft represent passenger traffic.

“While liquid hydrogen-powered narrow-body aircraft cannot completely replace [the] alternative to fossil fuels, they could cover nearly two-thirds of the narrow-body market,” the analysis says, adding that this translates to one-third of the total passenger aviation market.

At a 20-40% introduction rate, liquid hydrogen aircraft designs could mitigate 126-251 million tonnes of carbon dioxide by 2050, or about 6-12% of the aircraft’s inventory. passenger aviation for this year.

The analysis claims that 100% adoption would bring that figure to 628 million tonnes, but would still only represent 31% of the inventory – although this mitigation is enough to cap emissions at 2035 levels.

“Other technologies, including more fuel-efficient aircraft and sustainable aviation fuels, as well as measures to moderate traffic growth, will be needed to meet aggressive airline climate goals,” the report said.

Scalable aircraft powered by burning liquid hydrogen, he says, “don’t perform as well” as their jet-fueled counterparts, being more fuel-intensive with payload and range limitations, but could “still play an important role” in the decarbonization of aviation.

Fueling up with ‘green’ hydrogen – in which fuel production has near-zero emissions – will cost more than fossil jet fuel, requiring ‘carbon pricing’ to close the gap, but less than using “blue” hydrogen, derived from fossil fuel or synthetic drop-in e-kerosene.

While improved fuel efficiency through fleet modernization and operational changes will reduce emissions more than fuel switching, the speed of air traffic development exceeds these improvements.

“While important, fuel efficiency alone will not be enough for airlines to meet their climate protection goals,” the analysis says. “The bulk of the work to reduce the climate impact of aviation will have to come from switching fuels.”