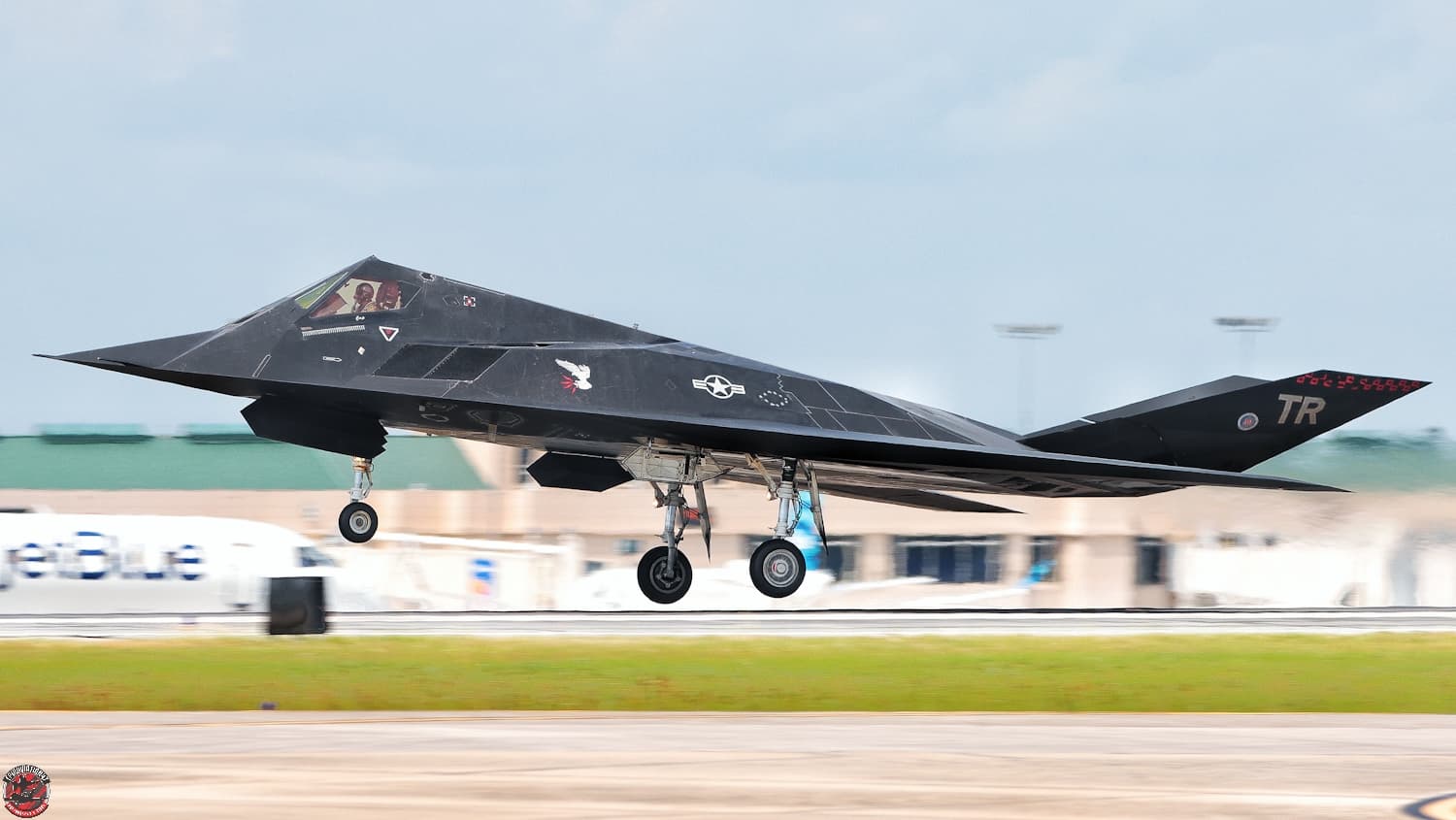 An F-117 Nighthawk takes part in an exercise at the Air Dominance Center in Savannah.

From May 2-15, Sentry Savannah allows fighter units from across the country to come to Savannah to train together on integrated tactics such as ground training, offensive/defensive anti-aircraft missions, missile defense cruising and weapons drop training on the range.

But, more interestingly, in addition to the official participants, there is another whose presence has not yet been made public: the F-117 Nighthawk from Tonopah Test Range. In fact, an F-117A (believed to be part of a unit known as the “Dark Knights”) has deployed to Georgia (and, to our knowledge, this is the first time the Stealth Jet has deployed on the East Coast) and is currently participating in Sentry Savannah.

The plane, registration 84-0828, along with the tail code ‘TR’, features a 40-year-old logo on both tails: it’s the first time we’ve seen an emblem celebrating the 40th anniversary since the flight inaugural which took place on June 9. 18, 1981.

According to our sources, two F-117s were initially scheduled to take part in the exercises, but one of the two aircraft eventually made the trip from Nevada to Georgia. The other Nighthawk is expected to remain in Savannah and play a role in Sentry Savannah for the first week of the exercise only. At the moment, the “Wobblin Goblin” makes two outings a day.

As of January 2021, the US Air Force still had 48 F-117s in its inventory. The service has about four aircraft each year, which means +40 should still be available. The jets perform the adversary stealth role allowing US squadrons to perform DACT (Dissimilar Air Combat Training) against a LO (Low Observable) aggressor and are also meant to simulate cruise missiles evading radar in various exercises. The Nighthawks are most likely also involved in the development and testing of stealth or counter-stealth technologies and tactics, such as some photographs showing at least one airframe sporting a mirror-like coating similar to that applied to two F-22s (one that appeared fairly recently) and to an F- 35, seem to prove.

We were talking about the Air Dominance Center in 2018, when we posted a snapshot showing a Chengdu J-20 Mighty Dragon replica parked in front of the ADC in Savannah: a few days later, we had confirmation from Col. Emmanuel Haldopoulos, Commanding Officer of the Savannah Air Dominance Center, that the aircraft was “a full-scale replica and remained at the Air Dominance Center for a short time during the week of December 4-6 [2018]. The USMC finances and directs the training objectives of this system […]”.

The J-20 replica eventually made its way to Marine Corps Auxiliary Landing Field Bogue, or “Bogue Field”, an airfield that serves as the Marine Corps East Coast site for landing practice Aircraft Carrier (FCLP) and Aircraft Carrier Qualification: Chinese Stealth. The mock-up fighter could be clearly seen parked on the left edge of Bogue Field’s north apron in a satellite image dated March 12, 2019. We don’t know what kind of visual training or sensing it was supposed to support there- bottom: this may be some sort of use of a night/day attack jet or helicopter pod or long range targeting in a simulated attack on an airfield enemy. Still, interesting.

A big H/T to our friends Misael Ocasio Hernandez and Gherardo Fontana for the images of the F-117 that you can find in this post. Be sure to follow them on Instagram for even more outstanding photos.

David Cenciotti is a freelance journalist based in Rome, Italy. He is the founder and editor of “The Aviationist”, one of the most famous and widely read military aviation blogs in the world. Since 1996, he has written for major global magazines including Air Forces Monthly, Combat Aircraft and many others, covering aviation, defense, warfare, industry, intelligence, crime and cyber warfare. He has reported from the United States, Europe, Australia and Syria, and has flown several combat aircraft with different air forces. He is a former Second Lieutenant in the Italian Air Force, private pilot and computer engineering graduate. He has written five books and contributed to many more.