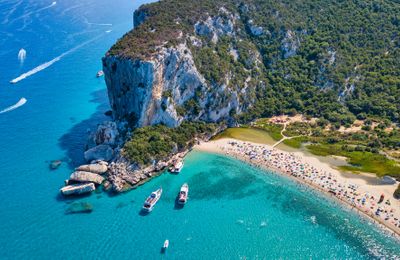 Many of us are looking forward to a sunny getaway after months of lockdown and Covid restrictions.

And to meet demand, airlines have announced a slew of new routes for 2022 with fares already on sale. Regional hubs such as Manchester, Birmingham and London Southend airports will be best served by the UK’s most popular carriers.

Start planning your 2022 getaway with our selection of the best new itineraries on offer. Just keep an eye on your destination’s Covid-19 entry requirements at government foreign advice page.

Malaga, blessed with around 3,000 hours of sunshine a year, is the gateway to the Costa del Sol – a stunning stretch of sea and sand. Here, you’ll find everything from bustling glitzy resorts to quiet fishing villages. But the city – birthplace of Picasso – is a destination in its own right which has reinvented itself as a cultural and historical hub. The Alcazaba, one of the largest Moorish fortresses in Andalusia, is not to be missed. Visitors also flock to the Picasso Museum and the Marques de Larios, a flower-filled pedestrian shopping street. Malaga also has some of the best seaside tapas and seafood restaurants in Spain. From this May, easyJet will launch six weekly flights from London Southend Airport.

Capital of the Algarve, Faro is the starting point for idyllic sandy coves and whitewashed fishing villages on the Atlantic coast. But before you slouch on a deckchair, consider exploring the city’s historic quarter (the Cidade Velha) with its Gothic cathedral and royal Episcopal palace Pau00e7o. You can also join a boat trip to a good spot for wildlife on the saltwater lagoons and tidal mudflats of Parque Natural de Ria Formosa. From this summer, Tui will fly from Doncaster Sheffield Airport to Faro twice a week.

Terceira is one of the largest islands of the Azores, an unspoiled archipelago in the middle of the Atlantic Ocean. With a volcanic landscape, it is home to spectacular lava flows and cave systems, as well as rare laurisilva and juniper forests. The cobbled streets of Angra do Herou00edsmo, the capital of Terceira and the oldest city in the Azores, are also worth exploring. Consider timing your visit to coincide with one of its many religious and cultural festivals or quirky street parties. From July, British Airways will serve Lajes International Airport once a week from London Heathrow.

Known as the Greek Ibiza, Mykonos is best known for its lively and glamorous party scene. But this Cycladic island in the Aegean also has plenty to offer shy introverts. The south coast has the best beaches; fine sand and turquoise sea sheltered from strong winds. The capital Chora will also enchant, its chalk-white cube-shaped houses with bright blue shutters draped in bougainvillea. After people-watching at the old port, head to Old Venice for sunset where balconies hang over the water’s edge. The island’s most iconic sight are the five spherical windmills of Kato Mili, each with a pointed straw-capped roof. From this year, Wizz Air will operate a summer service from Gatwick on Tuesdays, Thursdays, Saturdays and Sundays.

Most tourists flock to the exclusive Costa Smeralda with its picture-perfect white sand beaches and turquoise waters. But the rest of Sardinia has plenty to offer too, from the medieval walled city of Alghero to the island’s 7,000 enigmatic prehistoric stone fortresses known as the Nurage. Food is also a strong point. Avoid pretentious dining in favor of an agriturismo; rustic farmhouses that serve local dishes with bold Mediterranean flavors. During the summer months, Jet2 will serve Olbia Airport from Manchester and London Stansted twice a week, with weekly flights operating from Leeds Bradford (a Wednesday) and Birmingham (Sunday).

This lesser-known gem of the Dalmatian coast is the perfect alternative to the crowded streets and high prices of Dubrovnik. Known for its Roman and Venetian ruins, the old peninsular town of Zadar is surrounded by historic walls. Head to the waterfront where you will find the only sea organ in the world; perforated stone stairs that form underwater pipes and sigh with each wave. Next to it, also created by the architect Nikola Bau0161iu0107, is the Monument to the Sun; a solar light installation made up of 300 multi-layered glass plates. The surrounding islands of Zadar are also blessed with quiet beaches, olive groves and fragrant pine forests. From this summer, Ryanair will operate flights from Birmingham, Bournemouth, Liverpool and Newcastle airports.

Looking for a carrier you can trust? Find out how passengers rated their experiences in our best and worst airline survey.

Start of flights: started in November 2021

Jamaica’s second city has some very luxurious resorts where you can kick back with a rum punch and enjoy your own slice of Caribbean paradise. If you’re more of an active type, there are plenty of golf courses or colorful coral reefs to snorkel or dive in the protected waters of Montego Bay Marine Park. You can also listen to birdsong as you lazily glide down the Martha Brae River on a handcrafted bamboo raft. Virgin Atlantic launched three weekly flights from Manchester Airport to Montego Bay last November.

new routes unveiled for 2022 – Which ones? News