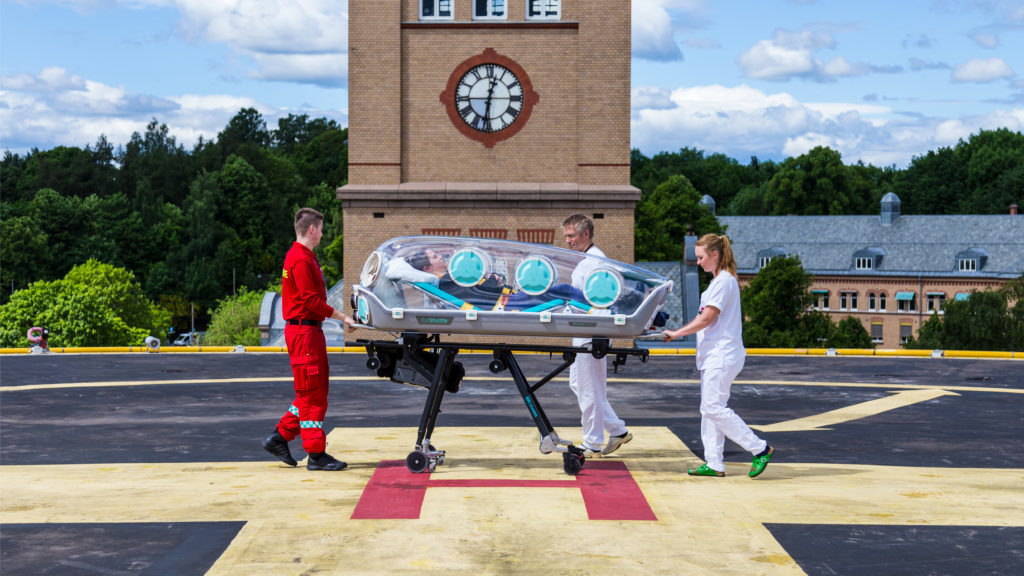 Over the past two years, medical air transport has focused on Covid-19. Air ambulance services around the world have borne the burden of transporting coronavirus patients.
In May 2020, at the height of the pandemic, air ambulance services were in such a rush that Prince William offered to use his private lawn at Kensington Palace as a place where they could land and refuel.

Apart from royal interventions, the pandemic has also led to a surge in demand for on-board medical equipment. Norwegian medical equipment maker EpiGuard has seen a 2,000% increase in sales of its EpiShuttle isolation pods for transporting Covid-19 patients.

Three of those sales went to German air ambulance operator FAI. “We own and operate three EpiShuttles which were purchased in 2020 and 2021,” said Volker Lemke, Chief Strategy Officer of FAI.
Since purchasing the Epishuttles, Lemke says, the pods have been used in 165 patient transports, “the majority of them on long-distance routes with transport times between 12 and 24 hours.”

FAI, which has a fleet of fixed-wing aircraft that includes Bombardier Learjets and Challengers, only uses EpiShuttles on the larger Challengers “due to the rather large dimensions of the EpiShuttle,” says Lemke.
Size was a major factor influencing the design of the device, says Fridtjof Heyerdahl, air ambulance physician and creator of the EpiShuttle, who is now the company’s chief medical officer. “The bigger the device, the better it is for the patient. But the smaller the device, the easier it is to board a plane,” he says. “So we had to make a trade-off between being able to fit it on as many planes as possible and being big enough for the patients.”

The idea for the EpiShuttle came to Heyerdahl following the Ebola outbreaks in West Africa in 2014. Heyerdahl was part of the team responsible for repatriating Norwegians from the affected areas and discovered during the work that existing equipment to safely transport infectious patients was inadequate. When designing the EpiShuttle, they found there were few industry benchmarks to work on. “There were no specific standards for the structure and size of these types of isolation modules,” says Heyerdahl.

Although standard dimensions exist for ambulance stretchers, these dimensions were designed for road ambulances and not aircraft, and do not take into account the three-dimensional structure of the isolation pod.

The EpiShuttle’s height is especially challenging for side-loading on planes that don’t have a rear entry, Heyerdahl says.

To help overcome this problem, he designed the pod with rounded ends to make it more manageable. Rounded ends also help make the patient’s head more accessible for rescuers providing medical care throughout the flight.

“The most important thing was to design it in such a way that I could treat the patient in intensive care,” says Heyerdahl. “So I can run the mechanical ventilator and syringe pumps through the pod.”

The design also had to allow for sudden changes in cabin pressure, which can compromise the aircraft’s ability to keep contaminated air inside the pod. Under normal circumstances, leaking of contaminated air is prevented through the use of a fan, which draws filtered air out of the unit, thus ensuring negative air pressure inside the unit. device from the outside.

This negative air pressure means that clean air is drawn into the capsule while only filtered air escapes. But if a sudden drop in cabin pressure results in “a positive pressure difference inside, you could have a situation where you have contaminated air leaking from the inside to the outside,” says Heyerdahl.

To prevent this, a special filter has been installed in the air inlet to prevent contaminated air from escaping.
The development of the EpiShuttle also had to consider how it would be housed on board the aircraft. EpiGuard has partnered with stretcher system manufacturers to ensure the bassinet can be attached to existing restraints on the aircraft. 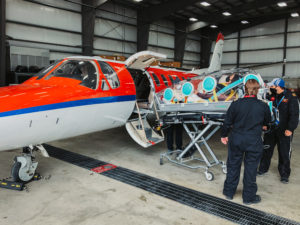 The EpiShuttle is easy to load and unload

In the case of European air ambulance operator FAI, floor plates were attached to the floor “to allow the EpiShuttle to be fitted optimally in the aircraft,” says Ellen Cathrine Andersen, CEO of EpiGuard.
While the EpiShuttle was designed for air ambulances, the most common use of onboard medical equipment is in commercial aviation. Almost all commercial aircraft, as well as business jets, carry medical equipment.

Although there is no set of global standards for on-board medical equipment, the International Civil Aviation Organization (ICAO) has published a set of general guidelines that states use to develop their own regulations.

“Ultimately, this is defined at the national level,” says Paulo Alves, global director of aviation health at MedAire, a provider of medical equipment and services to the aviation industry. “And some choose to go beyond the minimum standards.”

Alves gives the example of the United States, where commercial carriers have been required since 2001 to carry automated external defibrillators (AEDs) on board flights. In Europe, the obligation to carry an AED only appeared last year.

In addition to AEDs, commercial aircraft carry medical kits. According to Alves, the content of these kits is dictated by two main factors: severity and frequency.

For this reason, he says, most European carriers were already carrying AEDs before the recent EU mandate. Severe allergic reactions are another rare but potentially life-threatening event. For this reason, most flight medical kits contain epinephrine auto-injectors, better known as epipens.

Among common medical emergencies, Alves says, travelers “get sick and vomit, so you have to have medicine to deal with it.” 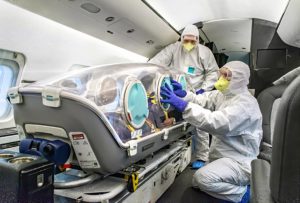 Once the issue of what equipment to carry on board has been resolved, commercial aircraft operators must consider certification requirements. According to Michael Andorka, Continuing Airworthiness Management Manager at the FAI, there are only two circumstances in which onboard medical equipment needs aviation certification beyond the medical certification it possesses. already.

This is either when the medical equipment must “be attached to the structure of the aircraft” or when “the equipment may cause electromagnetic interference” with the aircraft’s electronic systems, Andorka explains.
In commercial aviation, therefore, only electronic devices such as AEDs need to be certified for electromagnetic compatibility (EMC). In the United States, for example, defibrillators must be certified according to the FAA’s Technical Standard Orders (TSO).

Other on-board electronics with certification requirements include the Tempus IC2, a vital signs monitor for non-medical experts that Medaire includes in its kits. A multi-parameter monitor capable of measuring blood pressure, pulse, and electrocardiograms, the Tempus and its batteries must comply with FAA and EASA EMC requirements.

In the case of air ambulances, where the volume and complexity of medical equipment is much greater than in commercial aviation, certification is more likely to be required. In the case of the EpiShuttle, EASA’s certification specifications ruled that installing the device on board an aircraft constitutes “a major change”, Andorka explains.

Consequently, FAI was required to obtain additional type certification for the installation of the isolation modules on board their Challenger fleet.
For EASA certification, the EpiShuttle had to undergo three different tests: a flammability test, a rapid decompression test and a patient evacuation.

While the flammability test was performed in a lab, for the rapid decompression test a pressure chamber was used at a test center near Munich, Andorka explains.

“We repeated the test twice at different altitudes,” explains Andorka. “After each test, we verified the structural integrity and operation of the EpiShuttle against certain criteria.”

Patient evacuation, meanwhile, was carried out at FAI’s headquarters in Nuremberg and was overseen by an EASA test engineer and observed by an EASA cabin safety expert, says- he.

According to the specifications of the regulator, it had to be possible to evacuate a patient in 90 seconds in the event of an emergency. During the trial, FAI employees managed to evacuate the patient in just under a minute.
FAI Air Ambulance invested a total of $65,000 in testing and achieved supplemental type certification for the EpiShuttle late last year.

At the height of the pandemic, the urgency of the medical crisis meant there was no time to pursue certification. Instead, Andersen says, EASA has developed “guidelines for competent national authorities to grant exemptions for transport isolation devices and other medical equipment during the pandemic.”